We finally return to KITT-FM, where it's all kittens, all the time. And now, broadcasting live from our studios in Purrbank, Cat-i-fornia - heeeeeeere's your hostess, Mother Catresa!

Well, you know you're a delinquent blogger when you plan to write about your new litter of kittens, then realize that you forgot to write about the last litter first. See, the last litter - the Douglas kittens, named after two dear friends - included one with a kidney defect, and the heartache that goes with that. Plus, the background story of how those kittens got their names is a long, sweet one that needs to be told.

So, stay tuned for my next post about the "Dougies." In the meantime, behold the names of my new litter! Due to the right male/female breakdown, I have gone with a long-awaited "World Leaders" name theme, bubbling with silly puns. Are you sitting down?

I have four males, and they are: Meow Tse-Tung, Mouse-o-Lini, NaPawleon and Genghis Khat. And the lone girl? Cleocatra. Funny and cute, eh? Yes, indeed, even if I do say so myself. :)

This litter features four black kittens, and one brown tabby (Mouse-o-Lini). However can I tell four blackies apart? So far, I am going by the amount of white whisps on their chests, or lack thereof. But I can't tell from a distance who is who - except for little Cleocatra, a girly-girl who is more petite than her brothers. And, bless her adoring heart, she is the friendliest of the bunch - just like my Gormly Girl (G.G.), who looked just like Cleo as a kitten. Cleocatra is the first to purr for Mama C, and she gazes up at me with wonder. Oh, to be admired!

Mother Catresa
Patron Saint of Homeless Felines
(and the "smitten kitten)
Posted by Mother Catresa at 12:03 PM No comments:

We now return to KITT-FM, where it's all kittens, all the time. And now, broadcasting live from our studios in Purrbank, Cat-i-fornia -- heeeeere's your hostess, Mother Catresa! 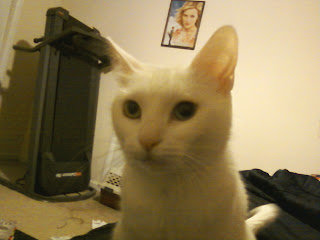 Isn't she beautiful? Her name is Bella, and she is the second white cat in a row that I have fostered. Snowball, the longhaired Angora lion, is happily settling into his new home, while this beauty stays in my guest room, and waits for me to take her to a Petsmart cage. I sleep in Bella's room a few times a week, and love the warm fuzzies she gives me.

As is often the case, I am appalled by how Bella ended up with us. A man called a woman who works at a vet's office, saying that his girlfriend had dumped her cat outside at a farm. Said girlfriend's rationale? The kitty more likely would survive there than at a kill shelter. The vet woman, who later called my organization, told the guy to go find that cat -- unspayed, not surprisingly -- and bring her in. I thank that thoughtful man for helping, and hope he breaks up with that heartless biyatch of a girlfriend. Imagine what kind of mother she'd make!

Bella's short, pure-white fur makes a pretty backdrop for her stark, unusual eyes: one blue, one green. She is sweet, but has a sassy side too, and sometimes gets overstimulated while petting. She might suddenly hiss during a loving petting session, but it's harmless, and she'll purr and come back for more, often within seconds. I honestly don't mind this peculiarity, though I wish I could break her from the habit (I'm trying, that's for sure, and she's made some progress). Bella is so lovely otherwise that I overlook this flaw. She would do best in a home without children, who could easily annoy her with too much, or too rough, petting, and get bitten.

Truth is, I'd keep Bella if I could. I love white cats -- I had two as a child -- and I am falling in love with this fair-headed beauty. Therefore, I must take her to Petsmart very soon, before my heart starts negotiating my cat population limit with my head.

Now, on the spring equinox, I have some exciting news to announce: I am getting my first litter of kittens tomorrow! The four babies come from a nice neighborhood stray cat that a kind woman took in before calling us (Foster Cat, Inc.) for help. Mom and babies are staying in the basement, and I will pick them up tomorrow night.

So long as the male-female breakdown works -- I need at least two girls, and at least one boy -- I am naming this litter after the family of two of my dearest friends from middle school: twin sisters Joy and Erin, and Douglas (their last name, and good name for a male kitten). And the mommy cat will be Bonnie, who is Joy's and Erin's human mom.

Who are these namesakes, you ask? Now, that's another story. It's a loooong story. It's a sweet story. And it's a story still highly relevant to my life, two lifetimes later. Remind me to tell it to you sometime.

Mother Catresa
Patron Saint of Homeless Felines
(and the "smitten kitten")
Posted by Mother Catresa at 11:18 AM No comments:

We now return to KITT-FM, where it's all kittens, all the time. And now, broadcasting live from our studios in Purrbank, Cat-i-fornia, heeeeeeere's your hostess, Mother Catresa!

Punxsutawney Phil, the Pennsylvania groundhog who makes his prediction about the end of winter on Feb. 2, has spoken: it's several more weeks of winter for us. But I protest on grammatical grounds: you can't have six MORE weeks of winter when you didn't have much winter to begin with. It's been a bummer of a winter here in Pittsburgh: often cold, but way too springy, too early, and only two mild snowstorms. So much for that "In the meadow, we can build a snowman" lyric from that Christmas carol!

The deficient supply of the white powder, perhaps, makes the start of Mother Catresa's 2012 all the more appealing: I got a white cat to foster, and another one is coming to my house this week!

Snowball, as we named him, looks to be a purebred Angora. See the picture: Isn't he a beauty? His hair is long and silky, and pure white. Pure as the driven snow, so to speak (and I'm going by memory here, hehe.) He is very sweet so he definitely was someone's pet, although the calloused assclown turned him loose. A kind woman in the south Pittsburgh suburbs found the terrified kitty wandering through her neighborhood, took him in, and called us (Foster Cat, Inc.) for a permanent solution. I picked him up a few weeks ago, and he spent most of his time hiding under my guest room bed - which, incidentally, has black bedding. The poor guy's coat, undoubtedly beautiful when cared for, was covered in mats - he looked like a shredded wad of cotton.

Last week, I took him to a professional groomer to get him a "lion cut" - where they shave the cat's body, leaving just a mane and at least part of the tail. That's why he looks a bit funny, but frankly, I think he looks stunning even with his hairdo - er, hair-don't. Just wait until that coat grows back and he has an owner who actually cares for him!

Snowball now awaits adoption at the Petsmart in Cranberry Township. I had him for such a short time, but I hated saying goodbye to him. When he came out from under the bed, he was such a lovebug. He would sit high up on my chest, practically throwing himself against my throat. I almost got a few mouthfuls of messy white fur!

I love white cats. In fact, as a kid, I had two of them. Burt was the original, and Smudge - a white kitten, except for an Ash Wednesday-like smudge of gray on her forehead - came in high school. There's something about the non-color color white: It's a symbol of purity, innocence and beauty. A white cat, to me, looks sweet and radiant, like a ray of white light. And it reminds me of my very first kitty cats, those I had as a child.

And now, perhaps to lessen the blow of the crappy winter, a shorthaired white female named Bella is coming to my house. Yeah, another mighty whitey! She is at a vet's office now, after someone found her wandering and gave us a call. My black sheets and comforter will be covered with conspicuous white fur, and so will my black sweat pants and t-shirts. But, I have the opposite issue with my black cat Gormly Girl (G.G.): She gets her black fur all over my light clothes.

But as we animal lovers know, no outfit or bed is complete without a little bit of cat hair.

P.S. Yes, that is my unpedicured foot sticking out in the picture. Don't laugh. 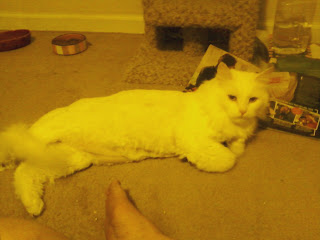 Posted by Mother Catresa at 1:49 PM No comments:

OK, I've been soooo bad about keeping up with the blog that I will just skip my usual opening radio blurb. You know that you're tuned into KITT-FM, and that I'm Mother Catresa, and that it's all kittens, all the -- well, at least some of the time.

Mama C apologizes for her absence again. I have been so busy with the freelancing ventures I have taken on outside of my job - and truthfully, I hope to turn the chronicle into a paid, published venture, so maybe I'm saving myself for that. But no matter. It's been way too long, and I am sorry about that!

I now proceed with my New Year's tradition of rounding up the head count from Mother Catresa's sanctuary from the previous year. Fans, I now present to you the Class of 2011 from the University of Catsylvania at Pittsburgh!

= First, there was the litter of chocolate kittens in the spring: Meltaway, Truffle, Bon-Bon and Lady Godiva. All are happily adopted.
= Then, along came the "Jack and the Beanstalk" kittens, with Jack, and Fee, Fi, Fo and Fum. All happily adopted.
= Then came my pair of adults, Jack and Jill. The gray tabbies patiently alternated between my guest bedroom, where I slept with them twice a week, and a Petsmart cage for several months. A wonderful young couple adopted both cats together just before Christmas, and I was so happy. But, when Jack's and Jill's new parents left my house with the cats, I went upstairs to their room to start cleaning. With "Jingle Bell Rock" caroling in the background, I started to tear up, turned around and went back downstairs. God, I miss those kids, but am happy for them. They deserve to be full household pets, and not be confined to just one room.
= Later in the summer, I took in a litter of six kittens, with an even male/female split. The boys were the Three Stooges - Larry, Moe and Curly - and the girls were a cutesy, girlie Buffy, Muffy and Trixie. Moe and Trixie -- both brown tabbies, with a white chest on Trixie -- are eagerly awaiting their forever homes. Could you be the one?

As always, I remain,

Mother Catresa
Patron Saint of Homeless Felines
(and the "smitten kitten")
Posted by Mother Catresa at 3:32 PM No comments: